The Museum of Genocide Victims was established by the Order dated October 14, 1992 of the Minister of Culture and Education of the Republic of Lithuania and the President of the Union of Political Prisoners and Deportees. It is housed in the same building where from the second half of 1940 even until August 1991 the Soviet security services, best known in the world as KGB, operated. For the Lithuanian nation this building is a symbol of the 50-year-long Soviet occupation, therefore it is of special importance that here the museum is founded to remind the present generation and to tell the future generations about the years 1940-1991, difficult and tragic for Lithuania and its people. 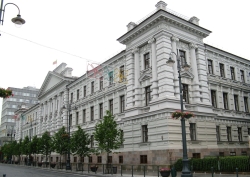 
In 1999, young and creative architects together with the museum employees devised a project for museum expositions. Since the museum is located in the historic building, the former layout planning was left in preparing expositions; it was attempted to preserve the surviving authentic details, somewhere to recreate the former premises or their fragments. The former KGB inner prison remained totally authentic, to be more precise, as it was left by the Soviet security men when moving out of the building in August 1991. 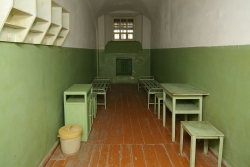 
Already in 2000, a new exposition was opened in the former execution chamber following the prepared project . 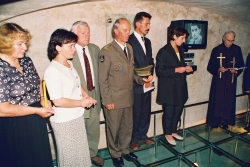 Opening of an exposition in the former execution chamber. 24 June 2000.


In 2002, expositions were started to be prepared on the ground floor of the museum – in November an introductory exposition “Lithuania in 1940–1941: Losses Starting…”was opened. It is housed in the former office of the deputy chief of the MGB (KGB) inner prison, therefore alongside expositions showing the country’s occupation and Sovietization, it is possible to view the interior of that office. The preparation of expositions on the ground floor of the museum was completed at the end of 2004, after expositions, dedicated to the partisan war of 1944–1953, were arranged. 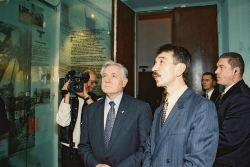 
In 2006, the first floor of the museum housed expositions, devoted to the imprisonment of Lithuanian residents in the gulag in 1944–1956, deportations in 1944–1953 and KGB activities during 1954–1991. In 2007, the last exposition on the first floor, dedicated to the civil (unarmed) anti-Soviet resistance in 1954–1991, flung its doors open to the visitors. In two premises of the first floor the former interiors will be also recreated – behind glass partitions a KGB photolaboratory and the room for listening to telephone conversations are displayed.


When the expositions telling about the Soviet occupation were finished, an opportunity to arrange an exposition about the period of the Nazi occupation in Lithuania was found. It should be mentioned that after polychrome studies were completed in the 3rd cell of the former KGB prison, signs made by Gestapo prisoners in 1942–1944 were discovered. Since restoration and conservation work was in progress in the cell at that time, it was only possible to open the exposition in 2011. 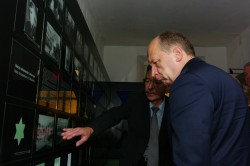