The LLKS Council‘s Declaration of Feb. 16, 1949 and Its Signatories

On Feb. 10–20, 1949, after some preliminary exchange of opinions on Feb. 2–10, the gathering of all the main partisans’ commanders of all the Lithuanian regions was held in the bunker of Leonardas Grigonis (partisan code name Užpalis; the commander of the Prisikėlimas partisan military district), which was located in the farmstead of Stanislovas Miknius in the village of Minaičiai (not far from the town of Šiauliai; now the Lithuania’s administrative district of Radviliškis). This constituent assembly established the Movement of the Struggle for Freedom of Lithuania (commonly referred to by its Lithuanian acronym, LLKS). During the assembly, the leadership of the LLKS was elected. The assembly discussed all the political, tactical, ideological and organizational issues of the LLKS, including the political program of the LLKS, the statue of the LLKS and the issues related to partisans’ uniforms, ranks and posts. The assembly adopted its appeals to all the members of the partisan movement and the rest of the population of Lithuania.

The Declaration as well as other documents, which were adopted by the assembly, became the legal and political foundation for the Lithuanian armed anti-Soviet resistance. On Jan. 12, 1999, the Seimas (Lithuanian parliament) passed a law to honor the partisans’ Declaration of February 16, 1949. The Lithuanian MPs stated that the LLKS was the sole legal authority within the territory of occupied Lithuania. The law of 1999 states, “The February 16, 1949 Declaration by the LLKS shall constitute a legal act of the State of Lithuania.”


The exhibition was created on the basis of the publication titled “The Declaration by the Council of the Movement of the Struggle for Freedom of Lithuania of Feb. 16, 1949 and its signatories,” which was issued by the Genocide and Resistance Research Center of Lithuania (LGGRTC) in 2009. Design by Alfonsas Žvilius. 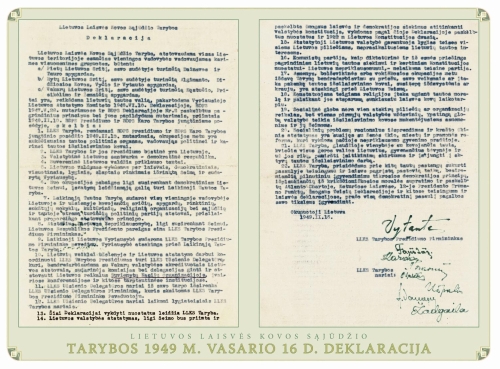